Random Adventures of a Single Woman

It was after 1am. I’d arrived at 11:45 pm anxiously waiting for the clock to strike midnight. Unlike Cinderella, I would not run away as the new day rolled in; I was ready to run toward my prince who would soon walk down the brick path, through the gates and become a fixture in my daily life. I’d waited more than five long months. Tick, tock, tick, tock …

Finally at about 1:30am I saw him briskly making his way toward the gate down the path I’d taken in the opposite direction almost every Sunday to see him. And there he was.

His clothes were hanging off him. The same outfit he’d worn the day I said goodbye to him in March seemed like it was on a different person. I could have stood there hugging and kissing him until the sun came up. He wanted to get in the car and onto the road to freedom.

He’d asked me – told me – for at least a week before the big day to bring it for him. I was reluctant, but I wanted him to be happy. After all he’d been through, he deserved happiness. So, when I left the house on that warm August night to pick up my prince, I packed a cooler bag with an ice pack, stopped at the convenience store and bought two of the tall, blue and silver cans I would come to hate. Two Bud Lights. His good ‘ol buddies. And off we went; me and the two 24’s.

I can’t imagine what it must have been like to walk out into the fresh, open air after being locked up for almost half a year. Freedom. Something I usually take for granted, except on those Sundays when I went to visit him. Visiting someone in a correctional facility is definitely an eye-opening experience. The process of ID checks; the people you meet and befriend, because you see each other every week as you watch the hand on the clock move slowly until they finally start calling last names of the prisoner you’re there to visit. The stories you hear, the heart-broken families, single mothers left alone with babies to care for. The way you’re treated as if you are the criminal through the process of getting in to see the convicted. ID check at main gate. Access granted to proceed to the other side of the barbed wire fence and down the path to the big brick building. Check-in again. Pockets emptied, purse in locker, spit out gum. Wait again. Numbers called, visitor passes collected. Wait again. Passes handed back; visiting table number assigned. Wait again. And wonder. Who is that woman to the man she’s visiting? Girlfriend? Sister? I wonder what they’re thinking about me. And then you catch a glimpse of the face you’ve been waiting to come through the door. Your loved one dressed in bright orange.

If visiting was that much of a process, then what the inmates had to go through must have been worse. I know it was. But I’d do it as often as I could because beyond the metal detector, unhappy CO’s and layers of security doors, was the man I loved.

I’m sure by this point, if I haven’t lost you already, you’re wondering a couple of things: why was my prince in jail? and what happened the night I picked him up?

Well, my love was in jail because he’d been charged with one too many DWI‘s. And as stupid as this might make me seem, no, that did not make me think he was an alcoholic. He’d gone through some rough times; hit a “bottom”. Gone to a place I would not wish upon anyone; friend, enemy or otherwise. He was broken, perhaps. We all are to an extent. He liked to drink; maybe too much at times. But not an alcoholic. Not him.

So, as we pulled away, with the barbed wire border behind us for good and the 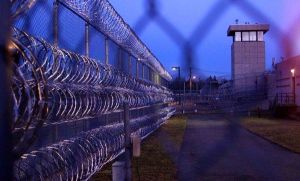 moon lighting the road to home, he asked if I had what he wanted. I don’t know why, but I said “no” and saw the disappointment in his face. I reached behind the passenger seat and pulled one of the cans from the cold bag. Looking back now, I know I lost him before I even had him. And I was the one that handed him his self-destructive weapon of choice.