Family / Random Adventures of a Single Woman / The Piddling Puggle 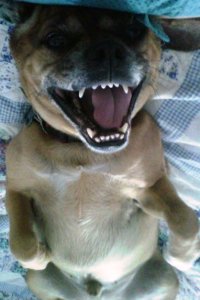 Over the past couple of weeks I’ve been having a new challenge with that cute little ‘ol puggle of mine. Yes, the one and only Walker Texas Ranger AKA Chuck Norris.

About two months ago he began having seizures; watching my dog have a seizure and not being able to do anything to help him is one of the most awful experiences I’ve ever had. I didn’t know what was happening. He became stiff, paws out straight, tongue hanging, drooling buckets. He shook and his eyes bulged. He looked so scared and helpless. I was scared and helpless and a mess. So off to the vet we went …

An exam, blood test, prescription for phenobarbitol twice a day and about $200 later we were off to a brighter, seizure-free future. Giving Walker a pill twice a day is easy; stick it inside a Snausage and he gobbles it up. Much easier than giving a pill to the cats, who tend to be more wary. So, phenobarbitol – great. Only about $11 a month. No problemo. I can handle that. One of the side effects of the medication however is increased thirst and with that … increased urination. But my boy could go for 12 hours without having to be walked. He’d be fine. Or maybe not.

Of all the spots he could pick in the entire house … he picked to pee up against the stove. The stove! Why the stove?!? And when I say he pees, I mean he PPPPPPPPPPPEEEEEEEEEEEEEEEEEESSSSSSSSSSSS! The worst part is that the pee travels and spreads onto the floor and soaks into the base of the kitchen cabinet beside the stove. This. Is. Not. Good.

So, I began walking him four to five times a day. Like clockwork he wakes me up at 6:45 a.m. We walk. I shower, get ready for work. We walk. I come home from work, and we walk. We walk again around 8pm. We play. We walk again around 11:00 p.m., and then we sleep. Until the piddling puggle’s internal clock or in this case his bladder wakes him up and he cries to wake me up so we can walk and start over again.

All that walking, and still, at times, he pees. Same spot. I rig wee wee pads on top of garbage bags, but it still doesn’t seem to be enough coverage for the puddles of pee this puggle leaves. While desperately seeking solutions through Google searches and posing the question to friends on Facebook (a great resource!), a poem came to mind that my now 93-year-old Uncle Steve recites to entertain family and friends. Amidst all the frustration the rhyme about a little piddling pup named Rex made me smile:

A farmer’s dog came into town,
His Christian name was Rex,
A noble pedigree had he,
Unusual was his text.
And as he trotted down the street
`Twas beautiful to see,
His work on every corner-
His work on every tree

He watered every gateway too,
And never missed a post.
For piddling was his specialty,
And piddling was his boast
The City Curs looked on, amazed
With deep and jealous rage,
To see a simple country dog
The piddler of the age.

Then all the dogs from everywhere
Were summoned with a yell,
To sniff the country stranger o’er
And judge him by the smell.
Some thought that he a king might be,
Beneath his tail a rose,
So every dog drew near to him
And sniffed him up their nose.

They smelled him over one by one,
They smelled him two by two,
And noble Rex, in high disdain,
Stood still till they were through.
Then just to show the whole Shebang,
He didn’t give a damn,
He trotted in a grocery store,
And piddled on a ham.

He piddled in a mackeral keg-
He piddled on the floor,
And when the grocer kicked him out
He piddled through the door.
Behind him all the city dogs,
Lined up with instinct true,
To start a piddling carnival,
And see the stranger through.

They showed him every piddling post,
They had in all the town,
And started in with many a wink,
To piddle the stranger down.
They sent for champion piddlers
Who were always on the go,
Who sometimes did a piddling stunt
Or gave a piddle show.

They sprung these on him suddenly
When midway through the town,
Rex only smiled and polished off
The ablest white or brown.
For Rex was with them every trick,
With vigor and with vim.
A thousand piddles more or less
Were all the same to him.

So he was wetting merrily,
With hind leg kicking high,
When most were hoisting legs in bluff,
And piddling mighty dry.
On and on, Rex sought new grounds,
By piles and scraps and rust.
Till every city dog went dry,
And piddled only dust

But on and on went noble Rex,
As wet as any rill,
And all the champion city pups
were piddled to a standstill.
Then Rex did free-hand piddling,
With fancy flirts and flits,
Like “double dip” and “gimlet twist”,
And all those latest hits.

And all the time this country dog,
Did never wink or grin,
But piddled blithely out of town,
As he had piddled in.

The city dogs, a conversation held,
To ask, “What did defeat us?”
But no one ever put them wise
That Rex had diabetes!

Of course, being a hypochondriac and an overreacting fur people Mama, I am ignoring the last line referring to diabetes. That’s all I need! We’re off to the vet tomorrow for another $100+ visit to see what we can do to help the pup AND me! If that doesn’t work out maybe I can turn him into a champion piddler and teach him the “double dip” and “gimlet twist”. Then someday the adventures of my piddling puggle will become famous and end up paying for all of these challenging adventures. Hey, a girl can dream.