It’s the second significant snowfall of the winter for us here in the NY metropolitan area. Grocery stores were mobbed last night in anticipation of the impending frosty precipitation (I know this because I was one of the members of said mob). Today, schools were closed and community activities cancelled. The prediction was six to nine inches. I haven’t gone out with my handy-dandy snow ruler to measure yet, but it’s nothing compared to the 18 inches that we got last week with violent winds causing up to four feet snow drifts. Still enough to cause a frenzy though.

While I’m not a huge fan of the freezing temps of the season, I must admit winter has grown on me. Something I never thought I would say, but there ya go – I said it. Not sure what has happened to me in my old age! Perhaps it’s the nostalgia that comes with the season and its simple comforts.

The snow makes me think of days off from school when I was young and my Mama getting me bundled up to go out and play in the white blossoms. She would put plastic baggies over my socks before she helped me shove my feet into not-so-easy slip-on boots. She’d give me a hug and a kiss, and I was off to go sleigh riding on the massive hill at the nearby neighborhood school.

It was thrilling, and it also scared the bejesus out of me the first time down the steep, slippery slope! When the fun was done and we were too cold to play any longer and too tired to keep climbing up that hill, I’d head home right back into my Mama’s arms. Just as she’d gotten me into my cold weather armor, she got me out. My feet were always dry, thanks to the baggies! She’d place my wet outer gear on the old radiators to dry, something I still do to this day, and then she’d take my cold hands and put them under her arms and squeeze them tight to warm them up.

From the time I was born, my Mama’s touch seemed to be the only thing that could warm me up just right. The story, as Mama would tell me, was that I had a bad case of jaundice when I was born and my body temperature was very low. They had me under heat lamps, but that didn’t seem to work. There was a nurse who believed in more of the old-fashioned ways and suggested Mama hold me against the bare skin of her chest. And, it did the trick. 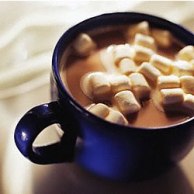 After a good day of sledding, hot cocoa was a must! And Mama always had it ready to go. Mmmmm sweet warmth topped with marshmallows. I still love it! I don’t do much sledding anymore, but I always keep some on hand for chilly nights. There was an article in the local newspaper just the other day about hot chocolate recipes, which I am dying to try. We’re talkin’ real chocolate, with milk and dressing it up with yumminess like Nutella and ginger. That’s what I’m talkin’ ’bout!

Sometimes, as an extra special treat on a winter’s night, Mama would make pancakes for dinner. Breakfast for dinner? I thought the woman was genius! Delicious, fluffy pancakes with butter and syrup and a side of plump sausages. As fate would have it, I read a blog post just yesterday by the Austin Gastronomist for Cinnamon Apple Pancake Cake, another recipe I am going to have to try this winter along with those hot chocolates!

So, this year I’m going to try to slow down and enjoy the beauty of the season that I used want to rush through as fast as I could. Despite the frenzy that will come with each snowfall, the shoveling, and the frigid temps, there is so much warmth that is to be had from the small comforts of winter.

5 thoughts on “The Warmth of Winter”